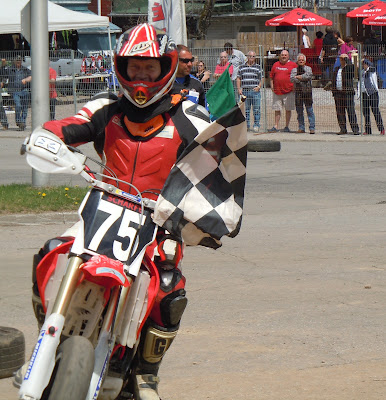 I want to say I am very thankful to have my sponsors back with me this year.

My main sponsor MMA INS. will be able to underwright in Ontario by June 2012. So call- 877-459-2365 and tell them Scharfe Racing sent you, for the best quote possible. 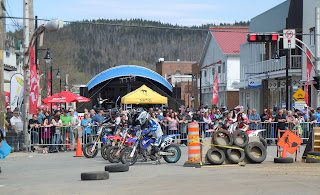 The first race was on the down town streets of La Tuque, QC. This is the best way to get the largest number of spectators. The people and the Mayor of La Tuque want us back next year.
The weather was perfect allowing for wide open speeds and big slides at the end of the long straight.

It was a 7 hr. trip to La Tuque Qc. and I was not feeling the energy I like to have to go into a series with. I need a few more practice days to get the mojo back. 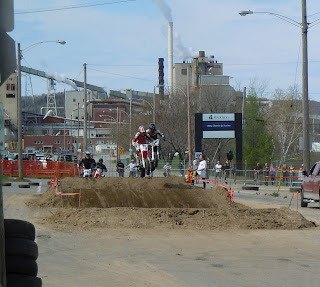 I had a hard get-off on the slick double jump and chipped my left elbow, bruised my left shoulder and ribs. And to think that this was just the start of practice on Saturday!

The semi pro class has 2 final races this year, so on Sunday that made 4 final 12 lap races I had to do in very poor physical shape. 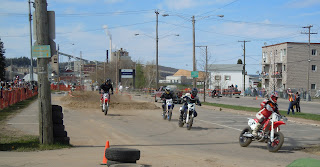 The Sunday finals were so tough as I
could barely lift my leg over the seat.
I won the SM2 250 as I had some energy to start the first race and, got the hole shot. 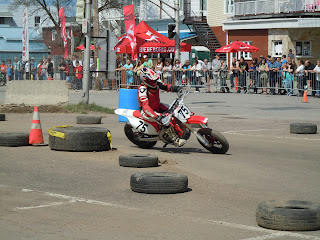 The SM1 was a joke as I neutral started and was last into first turn. I have never done that before. Every one was very fast and I tried to stick a pass numerous times at the end of the straightaway but, the guy would change up his lines and force me to back off before the jump. Some riders crashed so I don't know where I finished as yet.

Vet was the same as I had nothing left to give. I am re-thinking the next races, as 4 finals is crazy.

I will race SM2 250 plus SM1 open and that still makes 3 finals. The Vet class is behind me.  Time to stay with the young guys now,as they need a red target to chase. Ha...ha.. 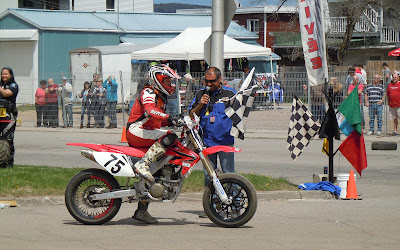 I hope everyone reading this site come out to see the next race at Shannonville Race track on the 17th of June.
This year again, the biggest Supermoto race in Canada will be at Mecaglisse race track on the 14th and 15th July. The race is called X-Fest. Book a room now in St. Donat QC.

La Tuque, QC. Photos by Pauline Scharfe.
She made it possible for me to even race 4 finals. Thank's Pauline, you made the weekend a great experience.