The Canadian National racing at Shannonville on Sunday the 17th was very competitive with exciting battles in all classes.
Supermoto Ontario ran the race day and did a super job you wouldn't have known this was their first event. Thanks Supermoto Ontario.
The dirt section was completely rebuilt with very challenging jumps. Two days later and my legs are still stiff. Dave Arnold was the builder.
With Dave around as our mentor the speed and level of serious talent has definitely been stepped up. Thanks Dave! 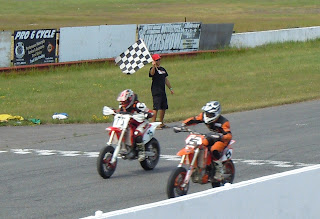 I tried to lay down the fastest practice time for a good grid position and after 10 plus laps I am shown the black flag.
Turns out I forgot to put my transponder on! Back out for two more laps. I got the fastest SM1 time for # 1 grid position for the qualifier.
The qualifier race was a start to finish 1st place. The pace was intense. 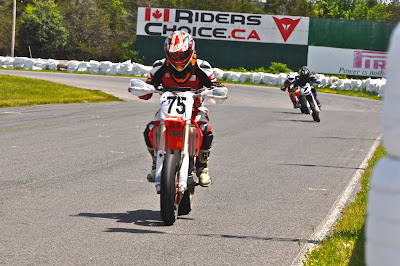 The first SM1 final race did not go well for me as I got called for a jump start. I had pulled into a huge lead in the first lap when I was given the black flag!! I slowed down and let everyone pass then the flagger indicated to continue, I picked it up again to finish 3rd. That flag probable cost me the Championship. This year there are two finals for SM1 and other pro races. In the second final I got a 3rd place start into the dirt section then one rider sky jumps into the slippery dirt turn, crashes right in my path almost taking me out. By the time I got on the gas I was back a position to 4th and the leaders had a huge lead. I put my head down and pushed until I caught Sam Harris our last year's SM1 champ. We swapped positions four times with Sam getting me in the dirt section and I would pass him on the pavement. The tight left turn in the dirt is my weak spot will work on that for next time. We crossed the finish a split second apart with Sam in 2nd and I in 3rd. Francois Asselin won with a flawless ride.

The SM2- 250 final race was a start to finish 1st place.
Thanks to all the Supermoto Ontario organizers for the incredible race day, well done. 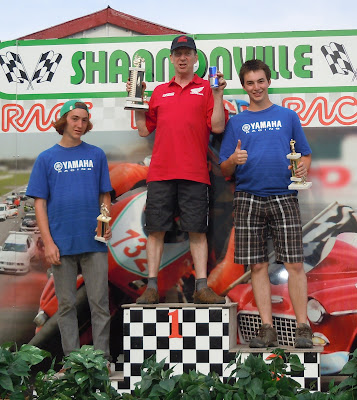 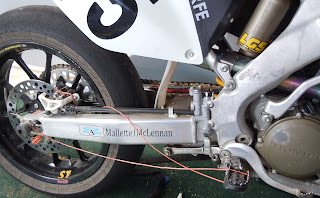 The photo with the cord wrapped around the peg  rear wheel and brake calliper, had my foot tied to the peg leaving me unable to brake for a lap before I was able to stand on one peg and wiggle my foot out of the looped string, very hairy manoeuvre with the throttle still on race speed. I did not hit the bail marker but just rode through the debris on the track. 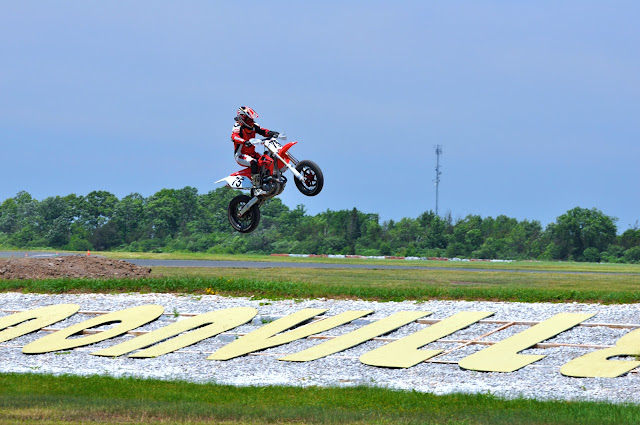