2016 MRI showed two bulges in the neck. Told not to do jumps or fall off at any speed.

We raced two Supermoto Nationals in open pro asphalt only. I rode my 250 Honda at Mecaglissse X-Fest against the big bikes. I could not ride the 450 CRF as the torque out of the tight turns seized up my neck. Rode with a good margin for error and had a good ride finishing 6th. That makes 11 years racing the big show of X-Fest  Shannonville Race day was perfect weather and i decided to ride my old 610 HMC KTM. Riding in rain is no longer an option so we were lucky to finish the season with a pro open finish of 4th. Looks like 2017 is finished for us in National Supermoto, but we plan to do some road racing in the Race series at Shannonville in the light weight class. Hope that the neck therapy allows me to continue the Scharfe race team story well into #75 years. Cheers !!

This season X-Fest started great with perfect weather and a win in the vet 35 qualifier.  I decided to run the 250 Honda in the 400 cc pavement class with a 21-inch front and 19-inch rear wheel setup. This wheel setup in the past was used in a class called 'sportsman' , I decided to use this class to stay fresh before the Vet 35 race. The Vet class will be all I can put my wrist and bad hand through the jump landings this year. The 400 qualifier had the 450 cc and the 400 cc bikes lined up for the same race. With so many on the same start it became mayhem. I saw a rider in front of me slam into the back of a stalled bike and as he went over to one side I had to change my line to miss him, then all of a sudden, I saw some tires and cones that were on the track right before the apex of the turn. I barely adjusted my line in time to miss the tires and was slammed into on my back side so hard it sent me and the bike flying over the tires. We landed with his bike on mine and I was knocked out.

It took a while for me to figure out what happened: I had a concussion, a ground up elbow, and could not get my head together to make the finals on Sunday. First time in 8 years to miss the main event. I will have some video coming to show what happened before the final crash. There are a lot of photos on supermoto Quebec Facebook, and supermoto Ontario Facebook, which show the sequence of the first accident. 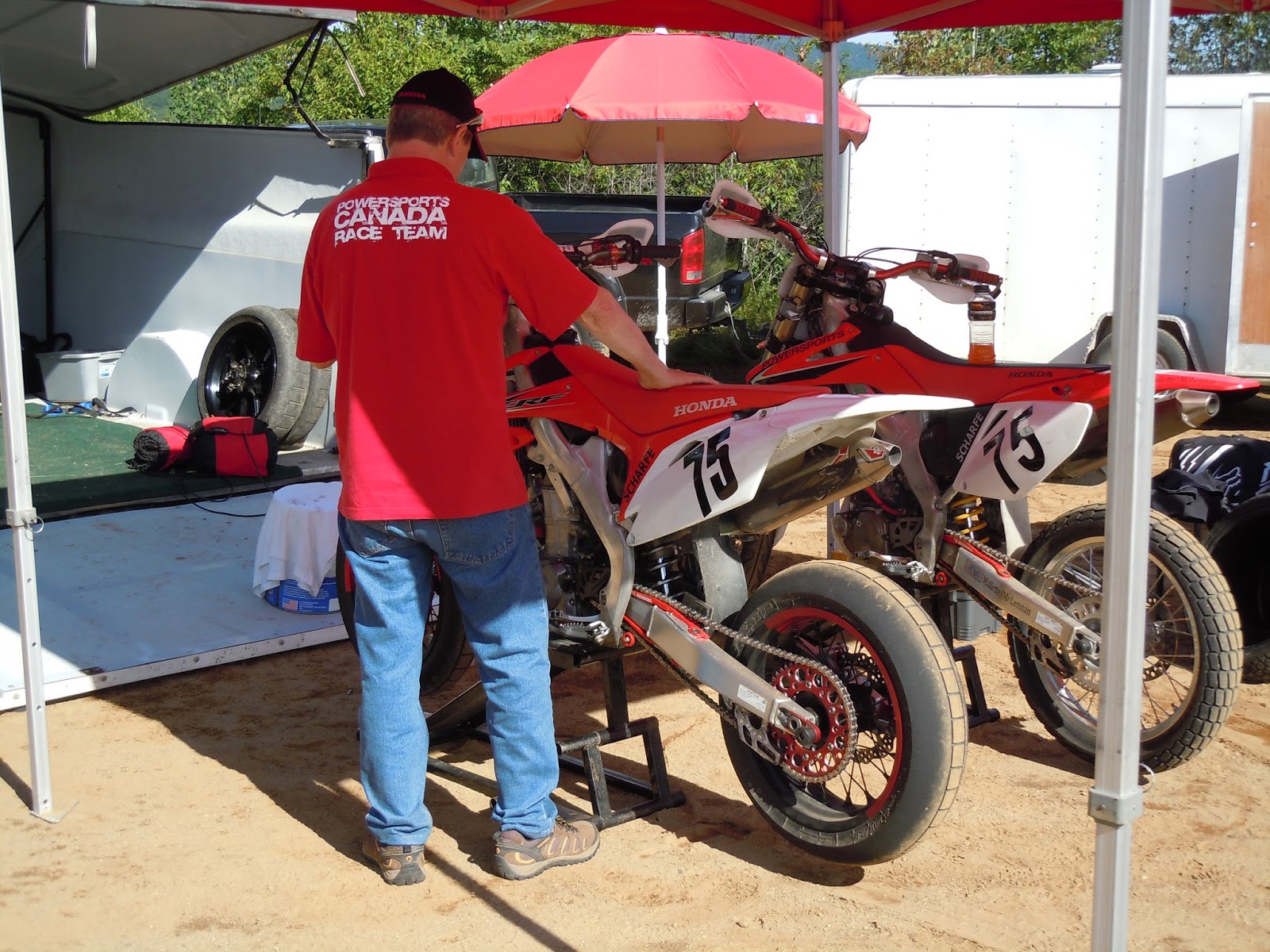 Man I love setting up for a X-Fest race weekend. 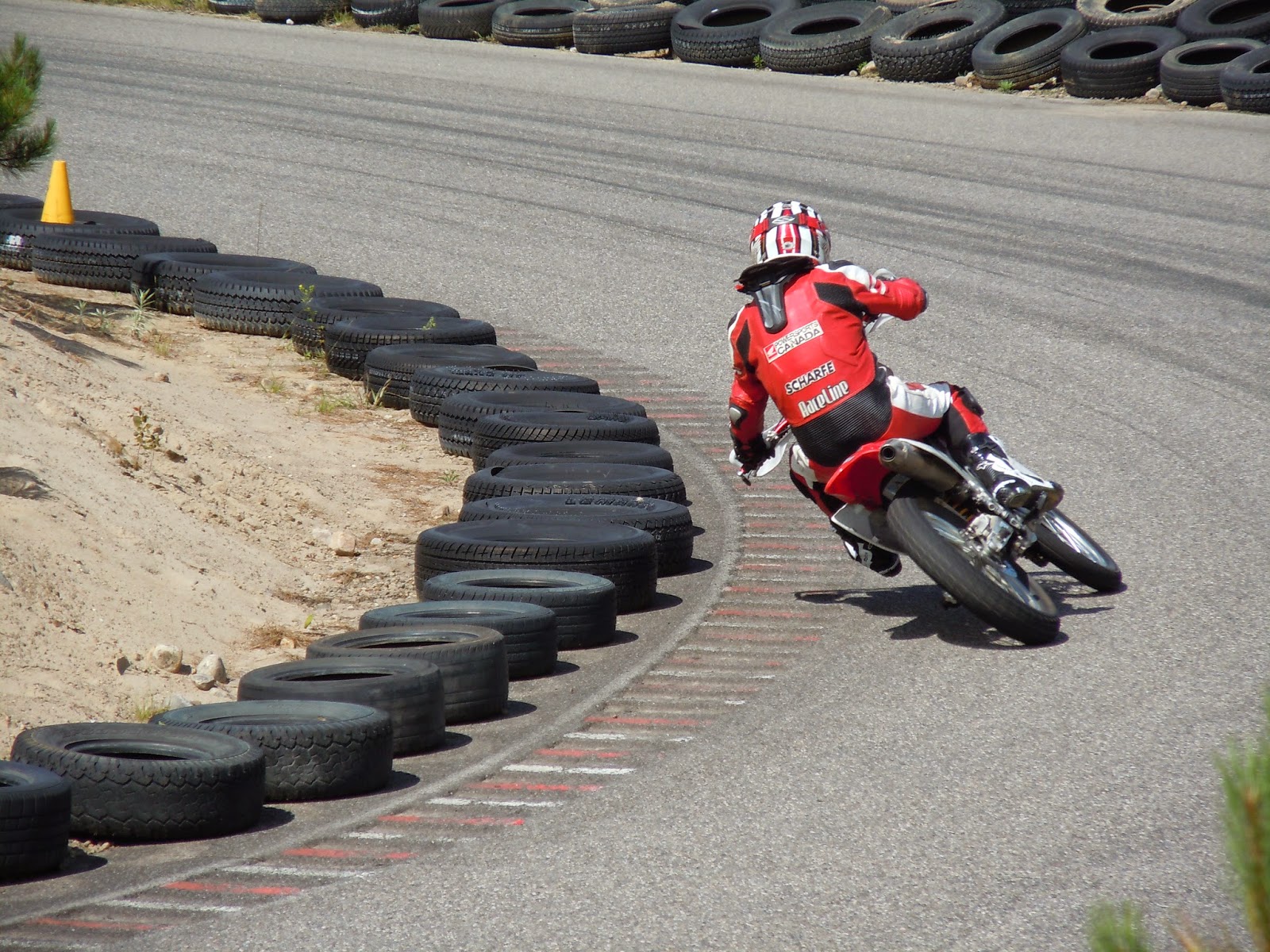 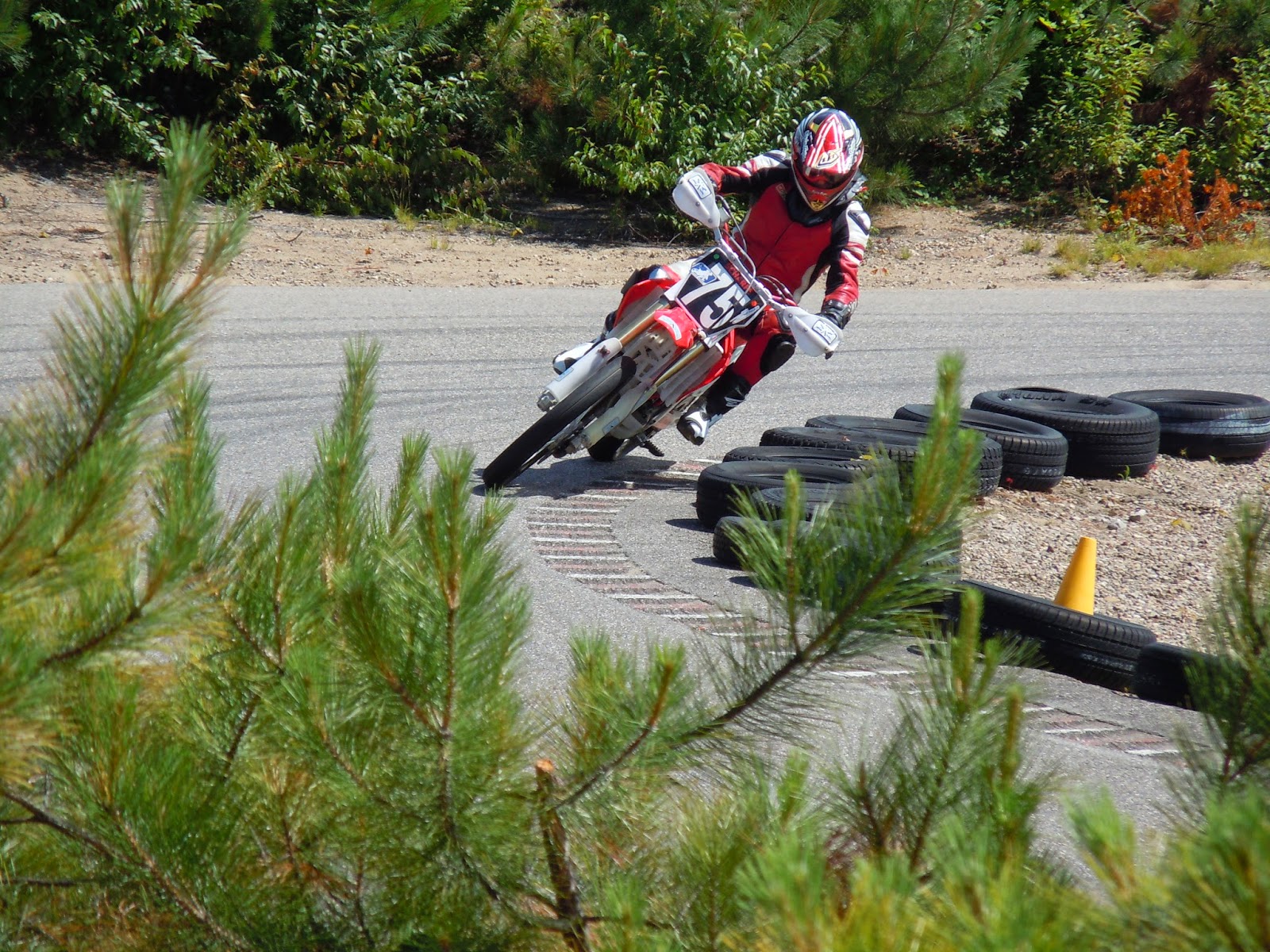 The 250 Honda handled so well i am sure to have a lot of fun riding it in the pavement only class.


The start of the Vet 35 qualifier went well for me as i got the hole shot and and set a pace that left me with a full straight lead at the flag. 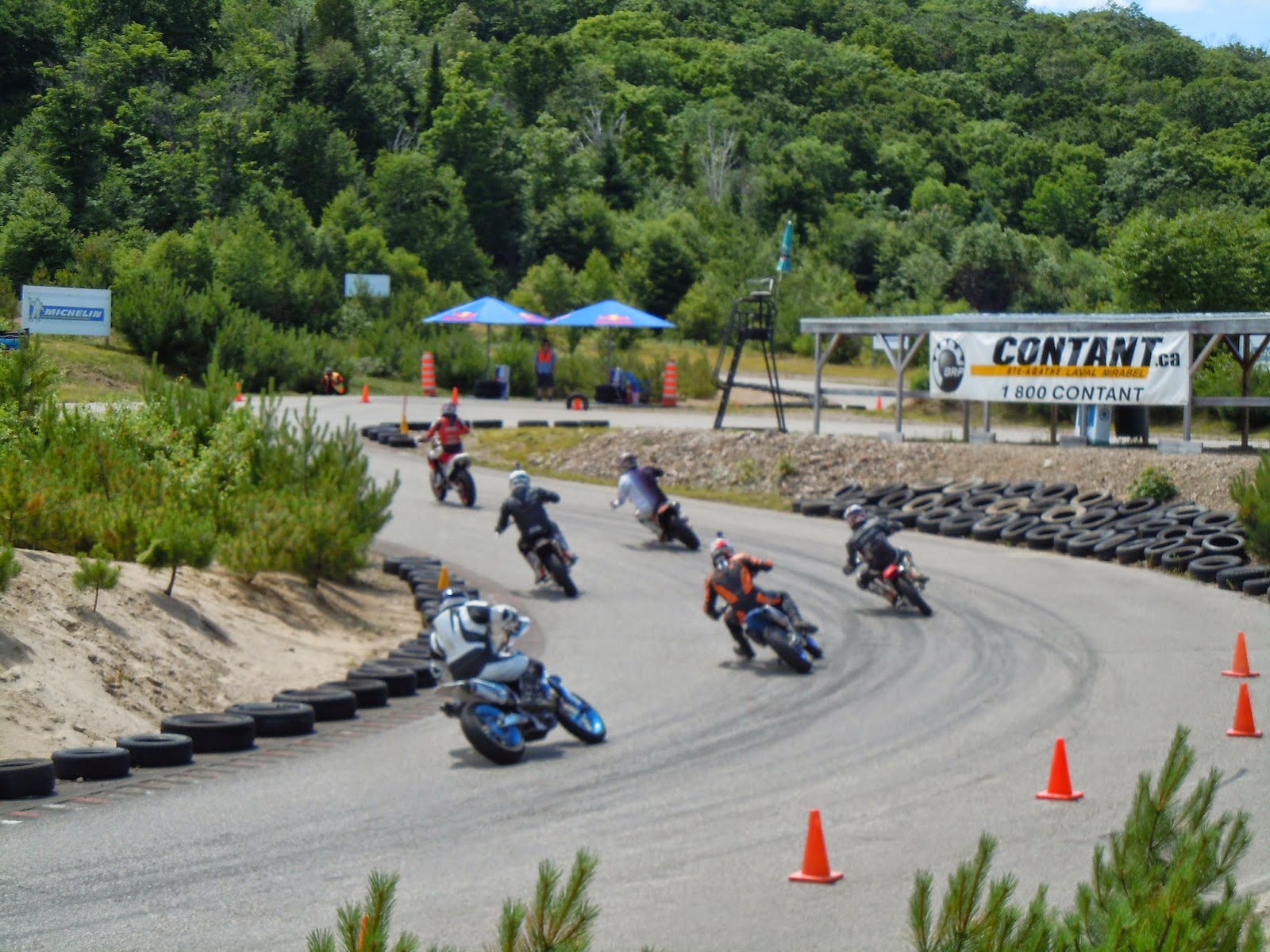 Just look at this supermoto racers paradise. I wish i could ride there every week but the ten hour round trip is pretty long..

I want to thank all the sponsors behind Scharfe Racing during the 2013 season. 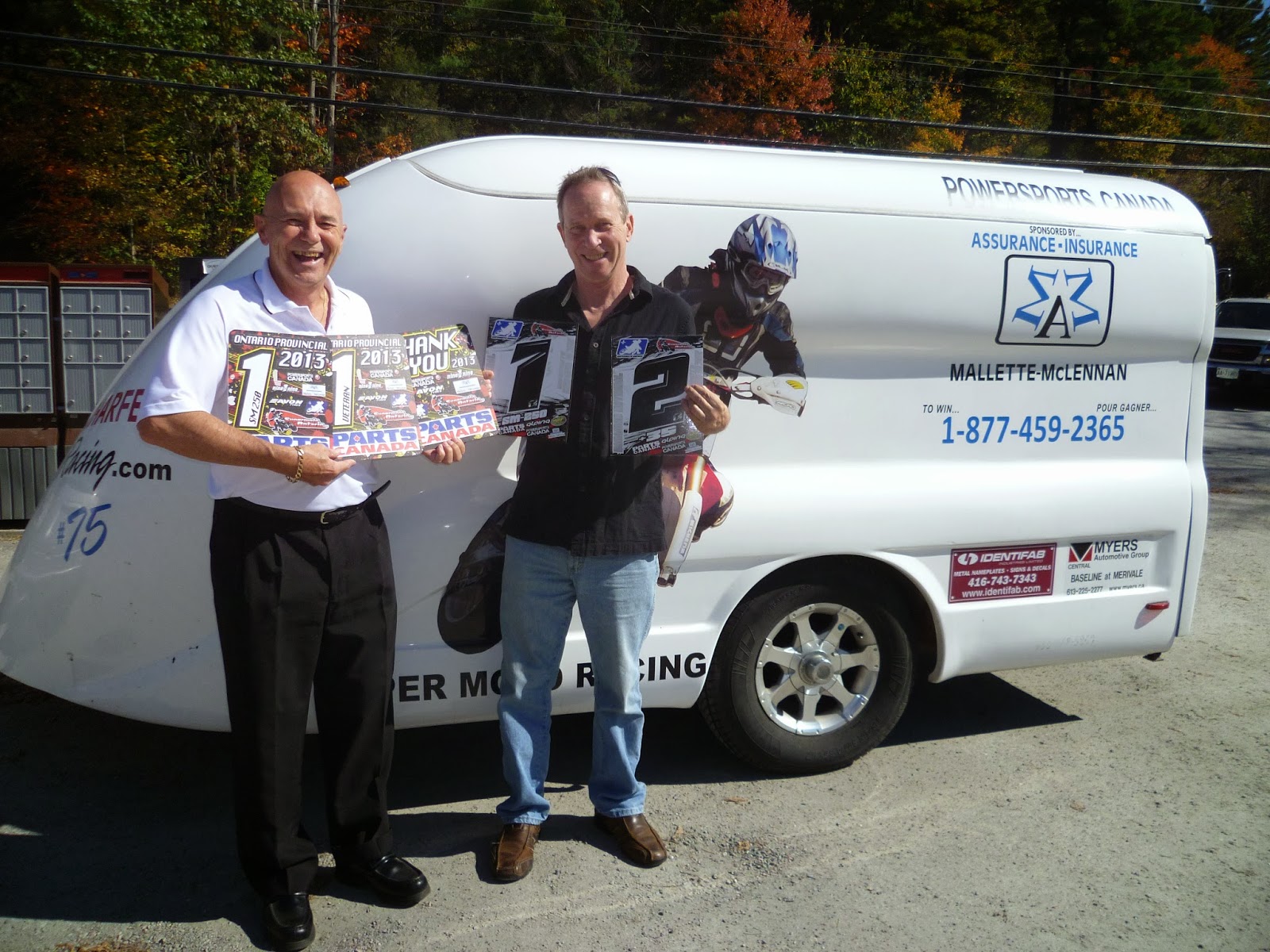 With out my well organized wife / pit crew i would not be able to get my helmet on or off let alone win any races. Thanks Pauline. 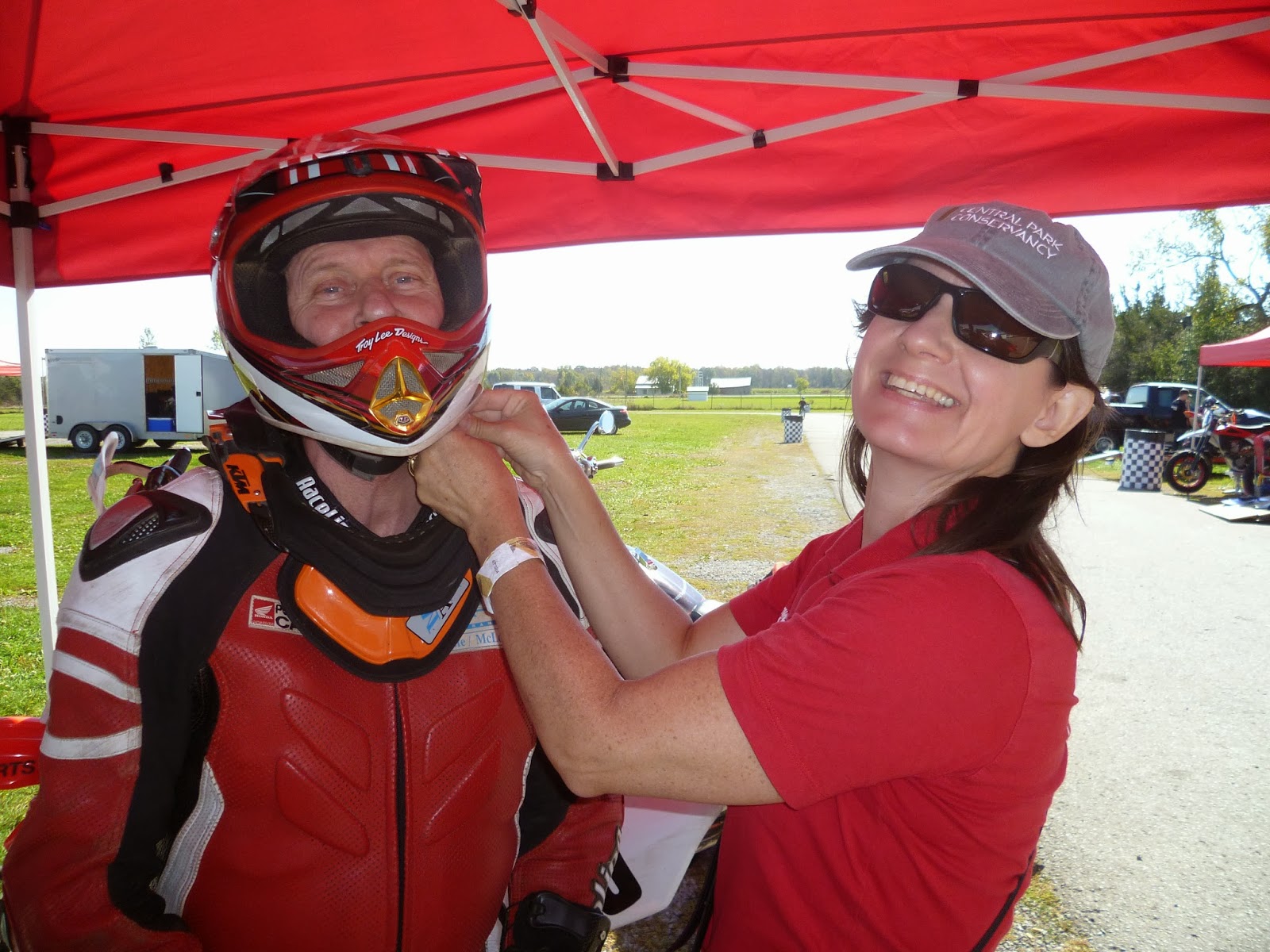 The racing was so close in every class with the sun warming the pavement providing excellent traction.The battles were at wide open speeds giving the fans a real show and the riders a huge shot of adrenalin..

I had a racers dream race in the final Vet 35+ class. I had won the qualifier with a hole shot start. This allowed second place to study all my race lines and this worked well for him.  He got the hole shot in the final race and held me off for seven and a half laps of the eight lap race..

When you get to race at top speed within arms length of each other all the passion for racing is rekindled.

The following photos show how he would pull twenty feet away from me in the dirt section (as riding close to one another was to risky). 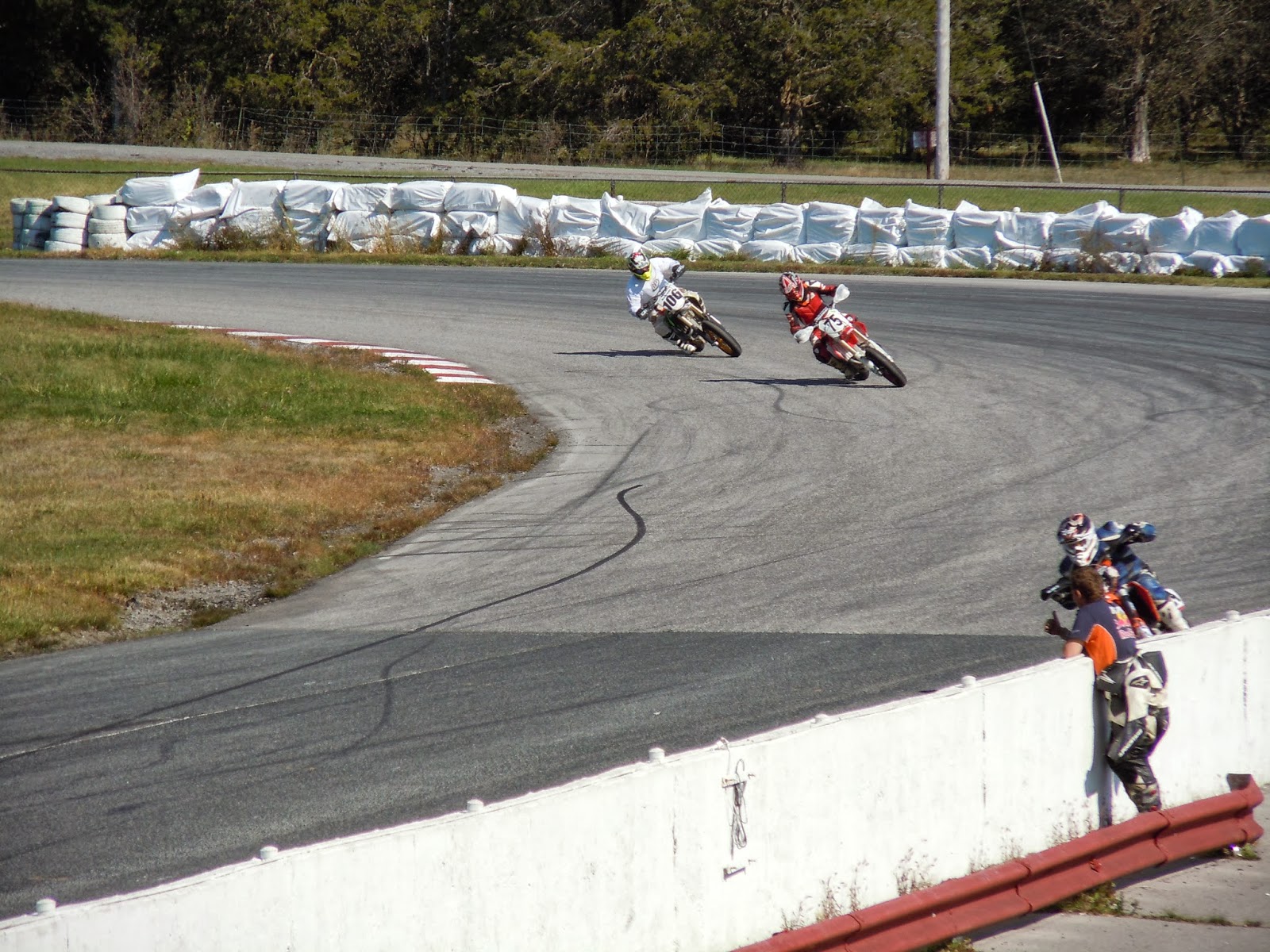 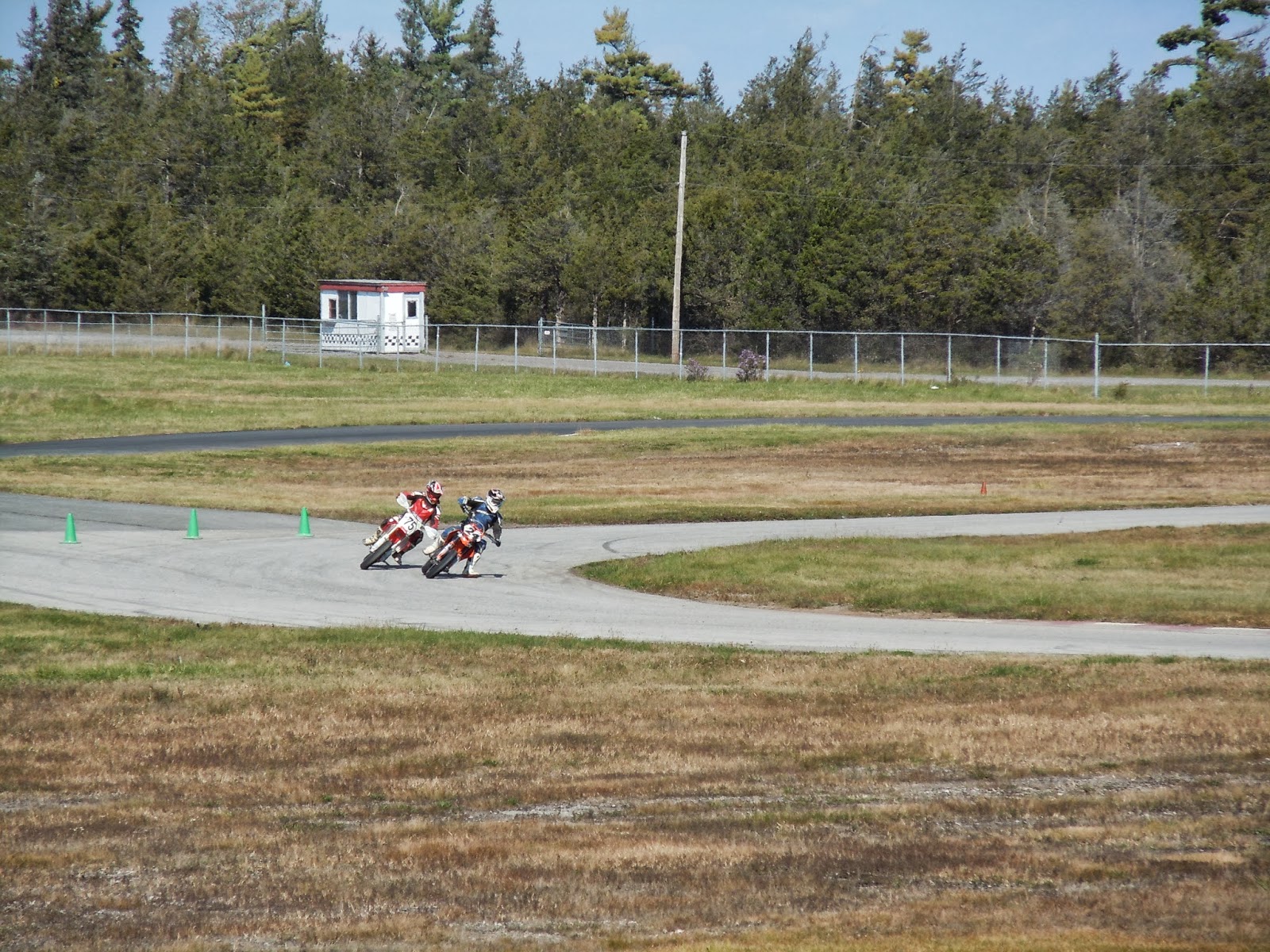 I would reel him in on the pavement and test his lines. I could only find one spot he was leaving open just a bit. This was a high speed left hand curve and to make it work i would have to really push hard inside and hope he was carrying to much speed to stay in tight.It all fell in place in that moment with the my nimble

Honda at max throttle grabbing just enough traction to get inside of him and take the race line away.He had so much speed that he caught a bit of the grass edge and had to slow to get back on line.

This was as good as racing can get!!

I was already to go with the trailer loaded on Friday August 23rd, before H-games in Chambly Montreal, but the body was not ready for race mode for that weekend. We decided to take a few more weeks to heal and put in a good hard practice on September 8th at Mecaglisse.

The practice went great. I got to ride with Fred Coymens, a pro rider in the series, and that really helped me get back up to speed.

I am looking forward to the September 29th Canadian National final race of the 7 race series at Shannonville race track. We hope to see lots of people show up for the final round.

If you're interested in "supermoto" racing come on down, and we will get you started! 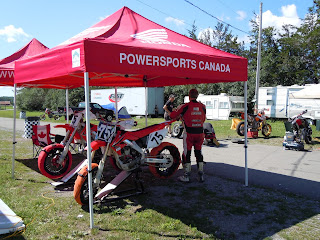 The practice on Saturday went very bad for me as I had a nasty high side entering a corner after a very bad oil slick was left on the track before we started our practice session.

A car driver blew a motor and continued to lay down oil in every corner rather than pull of right away. He really made a mess of the new pavement.

I was so sore on Sunday for the final i was not able to practice and only did the the Vet Qualifier. 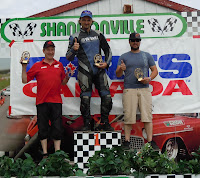 Managed to podium in 3rd place after missing three shifts due to my left leg sizing up through the trauma in my hip area. Eight days later and I have a hard time getting out of the car. LOL so much for riding with a 10%
margin for error.

In points the SM-250 class Canadian title again belongs to Scharfe Racing as well as the Ontario Provincial title.

I hope i can race in Montreal even with my very black and blue body as i am tied for second and 4 points off first in Vet 35. If only i could have rode the Vet in La Tuque we would have a good lead at this point. 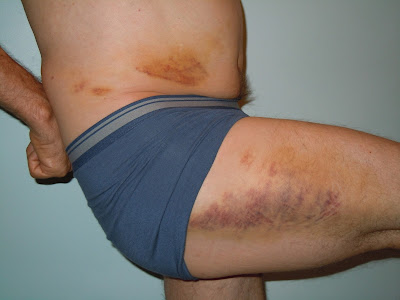